I was drawn back to Long Beach morning after morning.  I’d arrive soon after sunrise to see the last straggling females making their way back down the beach.  It reminded me of the descriptions of the sea tanks in John Wyndham’s “The Kraken Wakes”.  They are either unperturbed by people taking photographs of them in the morning, or at least resigned to the fact they can do little about it.  In the daylight you see just how long and lumbering their walk is.  In the time it took me to walk from end to end of Long Beach and back, a turtle may just about make it from their nest to the sea.   If they are lucky they get a helping slide down where the waves have eaten into the beach.   Once in the water, though, and buoyant, they seem to give the land a final wave with a flipper and then skedaddle quickly into the deeps.

Egg laying into the morning

Heading back to sea

Back to more comfortable environments

Turtles heading to the water

A little bit of tobogganing can help

Sliding back to water

A colleague from St Helena, Nikki,  arrived on a flight from the UK while I was there and she joined me on one of these morning walks.  As well as a few adult females making their way back to the sea, we almost stumbled on a nest where hatchlings were poking out of the sand.  In the centre of the nest pit, a cluster of little black turtle heads were poking up.  We cleared the sand away and they started to vigorously flap their slippers and release themselves from the sand.  Some escaped and started to head off in different directions.  By brushing a little sand away we seemed to have started a whole mechanism going below the sand and now the area was erupting with 20-30 little turtles.

An emergence of hatchlings 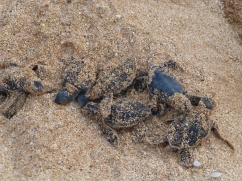 A cluster of hatchlings at the top of the nest 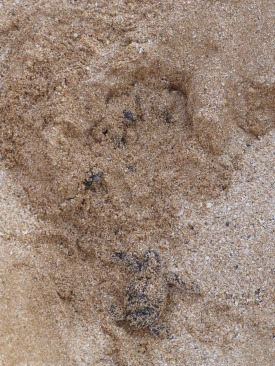 Almost hidden in the sand

They make their escape

Heading down the beach

A few go the wrong way

Neither of us were turtle experts so we just stood back and watched for a while.  Most of the babies were heading seaward but a few were rambling aimlessly up and down the nests.  Like little clockwork automaton, the legs kept on moving whatever they came across and often they tripped up on themselves and fell back down into the nest, or seemed to go round in circles when they reached an obstacle.  Nikki tried to help some of them reach the sea, but that was probably the worst thing to do. Waiting in the shallows were a shoal of the piranha like blackfish. Almost before a baby had learnt how to swim the shoal were on it, grabbing a leg each and the head and pulling the poor creature apart.  Frigate birds were also patrolling up and down the beach, and the crabs were not far behind.  Daytime is the worst time for a newly born turtle to try and make that treacherous journey.  At night you are still prone to a series of ravenous predators but at least you stand a faint chance. In the full daylight you were doomed.  I don’t think one of those turtles made it that day.

Heading to a quick death

Heading to the sea

We were feeling rather hopeless as more turtles were still emerging from the nest, when I spied Jacqui Ellick and her dog.  Jacqui is the queen of turtle monitoring on Ascension Island; she has patrolled beaches for nigh on twenty years.  Her husband, Ray, is a senior manager for Cable and Wireless and Jacqui initially took up turtle counting as a hobby.  Over the years, mainly down to the continuity of her service, she has provided reams of very important data that help scientists like Brendan and Annette monitor the success of green turtles.

We asked her advice on our emerging hatchlings.  She had a kind of modesty that suggested she knew nothing, but you didn’t stay a layman after so much time on one subject.  She shrugged her shoulders and said ” I dunno, I suppose you might just cover them up with sand.”  We piled sand over the black bodies and they immediately went still.  Lesson learnt and more respect to Jacqui for her knowledge.  There are obvious trigger mechanisms in a nest which make the hatchlings move.  And if there is sand covering the top ones they stop moving.  The lack of motion means the pile of turtles underneath also stay inactive.  But if the top ones are exposed then they start moving and the action sends shockwaves right through the nest and they erupt.

On my final morning on Ascension Island, I arranged to join Jacqui on the next count on Long Beach.  Tasha came along too and we had a fantastic walk and logged some useful data.  I’d been working with Jacqui since the start making a simple database to log her counts and we’d refined it over the years, but this was the first chance in seven years that I had seen how she collected her data for real.

Another straggler heads to the sea