Next goal was the top of Wig Hill and again we were clambering up and down multicoloured rocks – another noddy colony in the cliffs above us at one stage, several more booby nests.  We must have covered 40 or 50 individual nests that day as well as all the cliff monitoring and  colony counts.  But when you get down this way you make sure you do the maximum amount. It would be wasteful to have to make two trips. 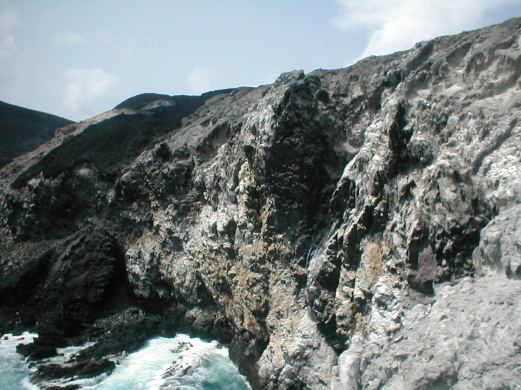 From the peak of Wig Hill we could spy more noddies along the cliffs to the west.  This south coast was one of the key areas for several species; Tara told me they tried to count more from the sea when they were on their way to their Boatswainbird Island trips as some of the colonies were so well tucked in to the cliffs.

A real sense of isolation

Then the time had come to return to the Land Rover.  Wig Hill had already been a climb, but ahead of us was a massif that towered three times the height, and to rub salt in the wound, we had to go down this hill first before tackling it.  We had been walking for over seven hours now, tired and footsore.  But we had to get back. So it was one foot in front of the other, no heroics, sheer stupidity to put on a spurt of speed, but just slow, slow, steady progress.

From the top of Wig Hill

The red lava of Wig Hill

I stopped looking upwards as it would just demoralize me.  But looking back from time to time was useful.  I’d make sure I would stop before turning.  Wig Hill looked even more like a hedgehog from this angle, and I could see the western part of the Letterbox in all its glory. And each time I looked back these features were indeed getting smaller.

Stedson, a good 15 years older than the rest of us, struggled up that hill.  But he had the stamina of a pack horse and just kept a steady if slow pace.  It was clear that stop start was unhelpful – if you stopped both your mind and body told you that that was the end, and it was a tough job to tell them to start again.

Eventually we reached a col just near where our original path this morning would have taken us off the track round Cricket Valley.  Simon, Tara and myself paused there to let Stedson catch up.  I looked at Simon.  He could not say a word, he was so shattered, but he did permit himself one of those smiles of achievement .  My clothes had been drenched in sweat, and blown dry again by the wind.  It was all worth it for the recovery of the bird populations. 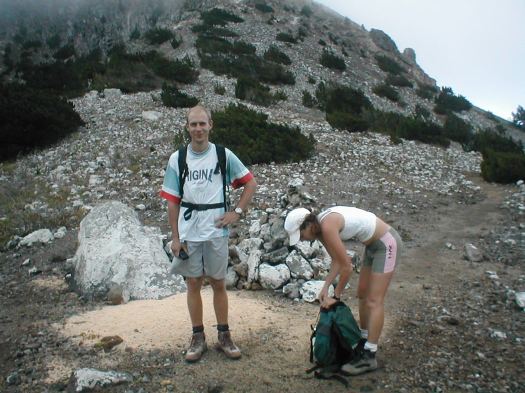 A shattered tiredness but a sense of achievement